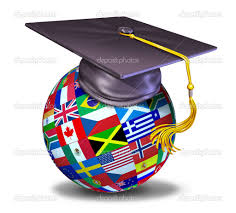 Any time new PISA results are released, they make headlines all over the world. On the planet of Education, they highlight a number of yawning heights, not least for Ecolint.

PISA is an international test in reading, mathematics and science for high school students, administrated by OECD in 65 countries.

Global PISA rankings are led by China, South Korea and Finland. They are followed by Canada; later come some of the “small” European countries – the Netherlands, Belgium and Switzerland. The ‘middle‘ group is led by the USA, with France and the UK at it’s bottom end.

Let’s look more in detail at the mathematics ranking. Here the discrepancy between the leaders (China) and the average (France) is greater than in reading and the sciences.

Here the USA and the UK did not even obtain an average score and Peru, with Kyrgyzstan, are down there at the bottom of the table on all parameters; at least they know in which direction to move.

Take a problem from PISA:

PISA questions are designed for people of all backgrounds and are hence mostly life-related. International Mathematical Olympiads, destined for top students, propose much more abstract and challenging problems. This is why the triumph of China and South Korea in both competitions is unique and impressive. USA and Russia are at the top in Olympiads but not in PISA.

US officials are aware of the situation with regard to the country’s maths skills: lots of money and effort are invested in education and the country’s not brillian ranking in PISA is improving, though slowly. Many US teachers are ready to learn, most fashionably at the moment from Singapore’s education system.

Finding the USA ranking far behind the Celestial Empire, US analysts recall the Sputnik effect in 1957, when, shocked by a perfidious Soviet breakthrough, the States had to reform radically all mathematical education systems. To get good specialists into schools, all means were used, for example exemption from service in Vietnam in exchange for becoming a maths teacher. The surgery worked – scores of qualified teachers entered classrooms – and the tumour retreated. Half a century later, the story is repeated, this time with respect to China. Another headache for Obama.

In Britain and in France, a number of maths teachers, despite their aura of modernity, still seem to carry a “colonial” gene. They are allergic to anything foreign to their tradition – for them the problems in PISA are irrelevant, the choice of students unfair and who was doing the ranking anyway? And pardon us – this is not for Wikileaks – whatever happens, we are the best, because it can’t be otherwise. God save the Queen, Vive la belle France.

Canadians are at the top of the list among the ‘big’ countries (China is not in the club of ‘big’ countries, it is ‘very big’). May the Canadian success be due to geography – what else except hockey and maths can you do in such cold?

For China it is a triumph of communism with a capitalist face. Practical results (Nobel Prizes) are at the door. After the fall of the Berlin Wall, scientists joked: MIT is the top American University, where Russian professors teach Chinese students. Now an urgent update is needed.

In Ivy League Universities, Asian students are getting 101% of points at SAT and AP tests and pushing out American candidates. Must these universities change their admission system for that of Oxbridge, where decisions based on interviews are objective by definition and foggy by form, so that the reasons for refusals are not disclosed?
PISA results wipe out another Western pedagogical myth: that Asian students learn everything mechanically, without creativity. Today’s Chinese students with their global top scores, including creativity, destroy this argument.

The invincibility of this educational dragon lies on the surface. The study of mathematics is the centre of attention for both the government and the family. Without top grades in maths, a student has no chance to enter a good college, and thus to rise socially. In Asian countries this concept is especially strong, because many leading officials have scientific education. Chinese students spend less time in extracurricular activities than their Western counterparts and concentrate more on academic subjects (this doesn’t however, influence their sports achievements – recall the last Olympic Games!)

In the 70s, at the Moscow Lomonosov University, I supervised certain Hyong Kim, a PhD student from North Korea, sent to study in USSR. Bright and curious, he worked for 8 days per week. Time and again, we tried to distract him, to seduce with Moscow’s attractions – museums, the Bolshoi ballet or simply student discos (oh Russian beauties of old days!) – but to no avail. Only before his departure from Moscow he made a confession:

“I was sent here by my poor country not to celebrate, but to learn the secrets of your Western technology, so that later we could beat you with your own weapon”.

This happened long before Huntington’s prophesy.

Asian students joining colleges in New York, London, Paris and Geneva are full of academic enthusiasm and work 24 hours per day plus night. Moreover, they regularly ask maths teachers to give them more additional problems. But time passes and many of them become contaminated by the temptations of new Babylons; soon they start to go out with their new light-minded western classmates and consequently study less. A year later, they are already well integrated and at school are doing the minimum necessary to pass.

The Swiss are generally content with the PISA results; moreover, they outran their ‘big neighbours’ Germany and France, towards whom the offspring of William Tell bear an inferiority complex. Geneva celebrates most loudly, maybe because its results are the worst in Switzerland.

Down the list we meet Russia. Once THE country of maths, since the end of the Soviet era it has been moving up the down staircase. Building capitalism on the ruins of socialism, Russia, contrary to China, did not save its greatest national treasure, a passion for learning. Is it due to a surplus of democracy, or, according to Churchill, because “Russia is a riddle wrapped in a mystery inside an enigma”?

What conclusions could be drawn from the PISA results for the international mathematical Education?

Mathematics remains the most hated and necessary school subject. Colleges are importunately curious about candidates’ maths skills. This is because, despite the Emotional Intelligence revolution, we still don’t have reliable measurement tools for EQ and so have to live with a trustworthy IQ.

Would you look for a pizzeria chef in Alaska or for an ice hockey coach in Nigeria? Both England and France have a great tradition in maths education; their programs and books are still excellent. But in the modern twittering world their methods do not reach all learners, they shoot wide of the mark. Is what is happening the end of educational Colonialism, a clash of civilizations, or a paradigm shift?

Why almost all decision makers in International Education are still Anglo-Saxons? Shouldn’t we look to the East, far to the East? Isn’t it time for new stars to get roles in the IB Pedagogical Saga?

Should Western educators continue to live with its eyes wide shut? Homo faber is fine as long as it goes hand in hand with scholastic excellence. Slightly less extracurricular activities, slightly more hours in the library, and European academic reputation will again tower above the Alps.

About the Author: Serge Hazanov